Need to chat?
You will be redirected to www.askavantor.com where our team is waiting to help you.

A revision to the ISO 9001:2008 standard has been in the works almost from the day that it was published. ISO standards go through revision every 3 to 5 years to ensure that they remain relevant and up-to-date. Formal revision to ISO 9001:2008 began in June of 2012, and is expected to be completed by the end of 2015.

What changes have been made?

ISO published an interview with Nigel Croft, Chair of the ISO subcommittee revising the standard, discussing the major differences between ISO 9001:2008 and ISO 9001:2015.

A vote on an earlier draft was approved by about 90% of ISO members in November 2014, but with over 3000 comments or suggestions on possible improvements. The subcommittee discussed and analyzed every comment and arrived at a final draft that was sent out to member countries for review. The members have been given 2 months to form a national position and vote on the latest draft of the standard before the September 9, 2015 deadline.

According to Croft, “the most extensive (changes) have been to the introduction and figures, which have been greatly simplified, with some of the explanatory text being moved to an informative Annex. The terms and definitions have now been removed from the standard and added to ISO 9000.”

Croft explained that the earliest versions of ISO 9001 emphasized requirements for documented procedures and records. In the 2000 update, a process approach was introduced that focused on managing processes and required less documentation. For the 2015 edition, the emphasis is on the use of risk-based thinking in addition to a process approach. It is performance based with a focus on what has to be achieved rather than how to achieve it. “We have achieved this by combining the process approach with risk-based thinking, and employing the Plan-Do-Check-Act cycle at all levels in the organization, while taking into consideration the context in which the organization operates,” said Croft.

What is the Plan-Do-Check-Act cycle?

Also known as the Deming cycle or Shewhart cycle, PDCA is a four-step management method used by companies for the control and continuous improvement of processes and products. The 4 parts are used as follows: 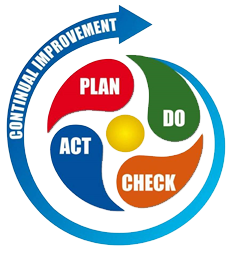 PLAN:
Establish the objectives and processes necessary to deliver results in accordance with the expected output.

DO:
Implement the plan, execute the process, make the product, then collect data.

CHECK:
Study the actual results and compare against the expected results to identify any differences. Look for deviation in implementation from the plan and also look for the appropriateness and completeness of the plan to enable the execution.